Go to content
Translated from the original German site "spirituelle-werte.de", partly with the premium app deepl.com. For possible stylistic weaknesses and inaccuracies we ask for your sympathy.

Knowledge instead of illogical faith 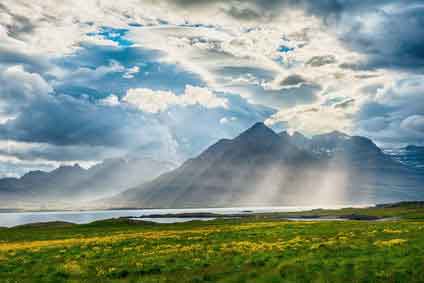 The reason why religion, which has no logic and no life, can only be harmful
When it comes to the basic questions of our existence, what predominates with the majority of us is an indifference that is difficult to explain. Hardly does anyone earnestly want to know why he lives on this planet, where he comes from, where he is going, and if his life has a meaning or not. Why is it so?
The word "faith," as used today, accounts for a large proportion of the general frustration about spiritual issues. Religious communities have taken monopoly of the term and demand from their followers the firm belief in their teaching and condemn any well-founded doubt. And that, even in a grotesque manner, they cannot conclusively answer the basic questions of our existence, but instead advocate doctrines that, when considered closely, contain numerous contradictions and question the perfection of God.
Most religious institutions actually expect us to believe without question, therefore blindly, their teachings, which, on closer inspection, contradict the clear statements of Jesus of Nazareth whom they claim to belong to. Should we accept doctrines that cannot explain our origin, our path, the structure and laws of creation?  At the same time, however, these communities do much to make their believers dependent on them, often not shying away from  the presumption of claiming to be the direct representative of God and the inalienable representor on earth. For example, they claim this right on the basis of questionable interpretations of the Bible and thoughtlessly write it down for millennia, as a sort of legacy. Just like that, without any plausible rationale! We should not come up with the idea of being able to find the way to the Creator ourselves – independently of the churches, sects and religions!
And since this often-tormenting dependency, which span over the past century, is the opposite of freedom, many people today would prefer not to concern themselves at all with the most important questions of our existence and with God, partly out of the fear of getting back into this dependency, but in part as well out of actual lack of interest, caused by decades of indifference. Here the meaning of what is spiritual is already dangerously stunted by  non-activity. And the bad impression of "religion" is in many cases confirmed by fellow human beings who have already been harmed - who, in false faith, became anxious and unfree, mentally atrophied or fanatical. 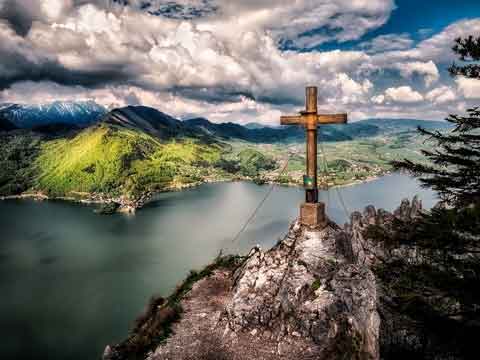 Millennia-old fake news:
The faith in a human redemption through the crucifixion death of the totally innocent Jesus of Nazareth.
So it is, that most people no longer want to hear about higher connections, and this makes the danger of total spiritual indifference and the doom-laden severance of the development of the soul and spiritual excessively significant!

But that's how we proverbially jump from the frying pan into the fire. For if we reject everything spiritual and rely only on the material, we are given sole sovereignty to the intellect. To this intellect, which devises fantastic gadgets, but by its intrinsic nature is incapable of doing the most important thing: to feel the indispensable ethical values of being human and to understand things that are beyond the earthly. Therefore, a materialist with an intellect-oriented mind will never be able to recognize something higher, let alone God.

And so, in long periods of time, we have become humans of this odd species now by the majority: on the one hand, we are truly accomplishing admirable achievements and rapid technological advances, but on the other, we are primarily using our achievements to get power, money and convenience and thereby inevitably spreading suffering and destroying  our livelihoods with greed! Even the rejection from large parts of society of the hitherto moral values is becoming more conspicuous from day to day! But without values, a person has departed from humanity and dignity!

Don’t events on a large and small scale show us undeniably that our chosen paths do not lead to happiness, health and well-being? The opposite is however the case: the self-inflicted problems and constraints grow from day to day, without the least possible solution in sight.

On the other hand, beyond a speculative, blind faith, is there any higher, clearer and more comprehensible knowledge of the connections in creation? Would this knowledge help us show ways out of the growing chaos that surrounds us? The answer to both questions is a clear yes!
But how can we know what is right or wrong, what is true or false teaching? The only way is to examine and inwardly feel through, whether what we absorb as knowledge in us, is really logical in all directions and corresponds to our sense of justice. This path requires efforts, but there is definitely no other way.
It also means that we are forced to relentlessly reexamine our previous concepts, our previously acquired knowledge! In the process we will find that even widespread ideological doctrines, which billions of people profess as "their faith", are therefore by no means consistent and true! Was it to be different, we would have peace and well-being all over the whole world!
This website is therefore aimed at people who deep within, still have the conviction, or at least the idea that "each man forges his own destiny" and that we have it in our own hands, to attract pleasing or problematic consequences, depending on the nature of our actions. Our actions also include our words, even our thoughts and our inner dispositions, of which the later are the driving forces behind the actions! And it is aimed at people who are struggling with the previous doctrine of belief in God, and beyond the widespread denominations, is therefore building this faith upon a new foundation.
I would be happy if the essays and lectures contained here are helpful. They were created partly from my editorial work for the journal "Grailworld", which was published till mid-2015, partly as lectures or are re-written for this website. To make understanding easy, they are organized according to topics of existential importance and are based on the all-encompassing knowledge of creation, which are laid down in the "Grail Message - In the Light of Truth".
This website is in upbuild - these topics are available.
New: Enigma Coronavirus - ﻿Is coronavirus a random mutation, a ‘punishment from God’ or something else?
Life after death - how it goes on according to the natural laws. Why a more natural view of death is very liberating.
Jesus of Nazareth - why his clear and pure teaching was significantly distorted in 2000 years
The Laws of Creation - basis and driving force for all events and for our fate
Back to content