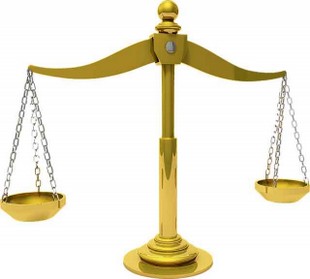 How its implementation would bring us social peace and harmony
We find it in countless natural processes: alternating day and night, inhalation and exhalation, ingestion and excretion, etc. We also have to heed it in the necessary balance between giving and taking, in the balanced relationship between work and rest, in the fair balancing of the interests of others with our own and much more.
If we did this, we would also have a harmonious society, a healthy monetary system and an interpersonal and economic coexistence that would work without any exploitation. And it would free us from a pronounced tendency that burdens the whole world: greed!
The law of balance challenges us to set our priorities totally different than before, and to develop from a predominant attitude of grabbing and possessing to one of giving and being humane. But it is precisely this that the whole world suffers the most from, because there are always questions that emerge: "What can I get? Where can I get it cheapest? What am I entitled to? How can I increase my prosperity?" etc.
It rarely bothers the people of our culture that their prosperity is based only on the massive exploitation of billions of people, up to the crime of food speculation, where out of speculative greed the starvation to death of millions of people is accepted, and this represents the greatest mass murder in the history of mankind - currently with higher numbers of victims than all wars put together!
If the law of balance is violated, this results in the widespread exploitation of man, animals and nature, the deepening of the gap between rich and poor and, of course, also in an imbalance that disturbs harmony between people. The consequence is then an ever-greater greed, which simply ignores the enormous damage, and on the other hand lets hatred, resentment, envy, in short an overall disharmony arise, which naturally cannot bring anything good through the law of reciprocal action!
Fate and Karma in the Law of Balance
However, what has just been said does not make much of an impression on most people if they are doing reasonably well. They usually view it as a goal, as a voluntary achievement that one can aspire to as soon as one has free time for it. They don't suspect that the fate and karma so dreaded and so often repressed are also very closely based on this law and thus in reality they powerfully determine their whole life! As the repression does not prevent the effect!
It is related to the fact that harmful actions from the past have to be evened out by the people affected by it, or also by animals or nature, so that forgiveness can be attained. In fact every thought, word and deed is a process that has repercussions according to the law of sowing and reaping and therefore has unconditional consequences. Without exception, every damage that we have done must also be "ironed out" again as soon as the lawful time has come for it. If we do not do this, the consequences befall us and bring us the effects that we had previously intended for other people. This is generally referred to as fate or karma and is triggered for example by illness, accident, mental stress or material damage. The severity of the effect depends mainly on the severity of the act, as long as we have not changed inwardly!
The same naturally applies to the good sowing, which is triggered and in fact manifests as a lucky charm.
This knowledge now gives us the key to learning to understand fate and, this is at least important to have, to be able to considerably mitigate the effects karma through voluntary improvement. This is a value that cannot be surpassed by anything else, and in this sense is the proverb to be understood: "You are the master of your own destiny".
Ignoring this important law of creation, like that of others, thus brings much unnecessary suffering to mankind; to each individual who does not want to worry about it, but instead "has something better in mind". This better thing then usually consists in earning money or in earthly pleasures. Only the one who modifies his priorities to want to be useful on earth first and foremost without calculated expectation, is the one who receives from this law as compensation the lessening of his karma, up to a full redemption without pain.
Herbert Vollmann wrote about this in his book: "The World wanderer":
"There is a Law that is decisive for the continuance of the entire Creation: The Law of the Necessary Balance between Giving and Taking.
Every happening in Creation is subject to this Law, whether it be the interaction between the forces of the celestial bodies or the sense of balance of the physical body. We follow it daily, though mostly unconsciously, when breathing in and breathing out. Or we endeavor to “get things to balance.” On the other hand we come to grief when something “upsets our balance” in things big as well as small, for nonobservance of this Law causes obstruction and disturbance, and if it is persistently disregarded, even downfall and ruin. Let us think for a moment of the relation between work and rest. Unnecessary exaggeration in work is just as harmful as a comfortable life, a “retiring from work.” Both bring disease and premature death. Only the right alternation between them has a balancing effect.
The constant balance between giving and taking makes for healthy movement, which alone brings upbuilding and maintenance, and invigorates and refreshes the spirit. Harmony and peace enter when giving and taking balance each other.
Giving ranks first here, for only in giving is taking implied; just as we must first give something through proper exhalation, in order to be able to receive the invigorating elements through the deep inhalation thus brought about.

Therefore Jesus also said: “It is more blessed to give than to receive” (Acts 20, 35). He who gives selflessly, whether of earthly or spiritual values, ultimately gives most to himself, because he may receive many times more than the good fruits arising from his good seeds!
Every act of giving must be balanced by a counter-value in some form. Even a person without means can thus bring about a balance by a kind look, heartfelt gratitude or some good advice.
(The World Wanderer: “The Law of Balance”)

to be continued, 5. The Law of Constant Motion