Go to content
The physical processes of dying
So let's turn straight to the third question:
What happens to us after we die? Are there laws that determine our further way in the Other World?
If practically all religions point to the necessity of a good and virtuous life, there is a deeper reason for this. For according to the laws of justice it cannot, of course, be irrelevant whether we have spent our lives building up, peacemaking or as villains. 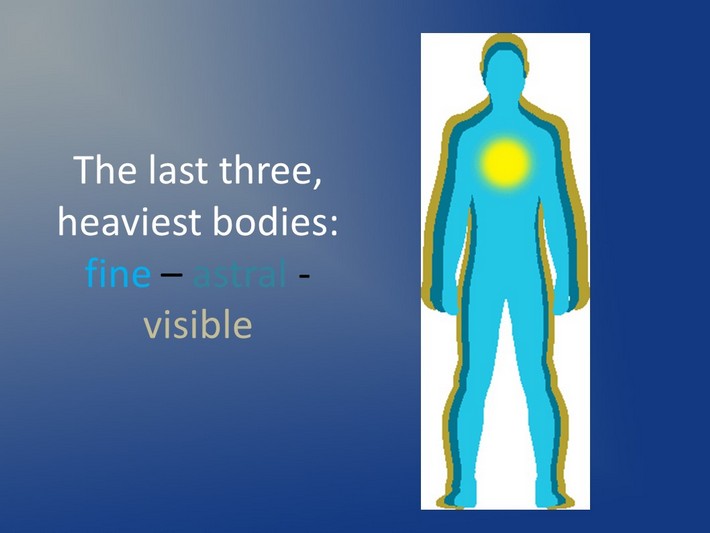 A picture of the three coarse material bodies.
The spirit, our spiritual core, is represented in this case as a yellow dot in the area of the solar plexus.
From a purely physical point of view, we have three bodies from the lowest region of creation of the coarse matter alone: the body of heaviest coarseness and greatest density, which we can all see, and which remains as a corpse at death, the body of medium density, also known as the astral body, and an etherical body of fine coarse matter. In addition, there are several even finer bodies, which are thus even more etheric, as coatings of our real ego, of our spirit, which is the real human being, i.e. ourselves. Everything else are only sheaths. 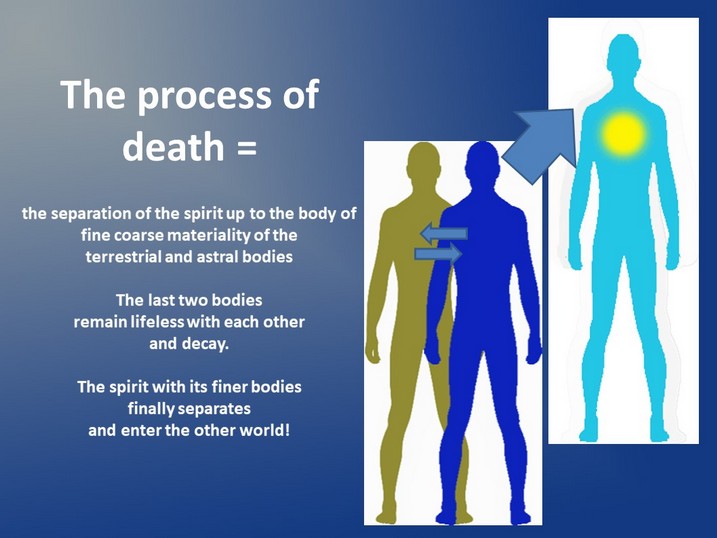 Of what use is it to try and bury your head timidly in the sand like an ostrich, to evade this reality? Face the facts boldly! You thereby make it easy for yourselves; for here progress is quicker.
Make a start! But realise that all old debts must be settled. Do not expect blessings to rain down upon you immediately, as many fools do. Perhaps some of you still have a long chain to expiate. But he who despairs on that account only harms himself, because it cannot be spared and remitted him. Through hesitation he only makes everything more difficult for himself, perhaps for a long time impossible.
This should spur him on not to delay another hour; for he only begins to live when he takes the first step! Happy is he who plucks up the courage to do so, for link by link he will be released. He can rush ahead with giant strides, jubilantly and gratefully overcoming also the last obstacles; for he becomes free!"
(Grail-Message, lecture "Ascent")
This website is in upbuild - these topics are available.
New: Enigma Coronavirus - ﻿Is coronavirus a random mutation, a ‘punishment from God’ or something else?
Life after death - how it goes on according to the natural laws. Why a more natural view of death is very liberating.
Jesus of Nazareth - why his clear and pure teaching was significantly distorted in 2000 years
The Laws of Creation - basis and driving force for all events and for our fate
Knowledge rather than faith - why real faith is not as what is understood by Christians
Back to content